The warm summer day of July 1, 1997 passed quietly except for a handful of Communication faculty who remembered that it marked the 25th birthday of the department under its current title. The Silver Anniversary celebration had been kicked off at the annual Communication Awards Banquet two months earlier, and there were a number of events marking the anniversary throughout the 1997-1998 academic year. But the official birthday was July 1st.

Perhaps one of the reasons that this marker did not achieve wider recognition is the long and distinguished departmental history that had spanned some 105 years by the time of Communication's Silver Anniversary. 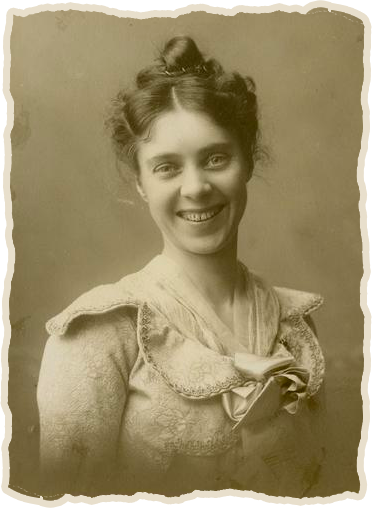 The humble beginnings of what the late Professor Emeritus Wallace Goates proclaimed as the first speech department in the nation, can be traced to the year 1892. It was then that Maud May Babcock (pictured) was recruited from the faculty at Harvard University to establish a Department of Elocution at the University of Utah. Elocution was taught by other instructors prior to her arrival, but it was Professor Babcock who brought the study of speech to departmental status at the U.

Over the years the department went through a wide variety of transformations as speech education and academic configurations changed to keep pace with the times. At first elocution was paired with the study of physical education, and later with both dance and theatre. The department title "Elocution" had been replaced with "Public Speaking" by 1916. Later it would become Speech and Theatre Arts. In 1962, the University underwent a major restructuring of academic units at both the college and departmental levels. Among the changes resulting from this restructuring was the creation of separate departments for ballet and theatre within the new College of Fine Arts. Halbert Greaves was selected to be the first chair of the reconfigured Department of Speech housed in the new College of Humanities that would later evolve into Speech Communication under the direction of Richard Rieke.

Just as early classes in elocution, oral interpretation and debate had existed within the English department before Maud May Babcock established a separate academic discipline on the University campus, English classes were being taught also within the arena of journalistic writing. By 1948 the journalism curriculum was deserving of its own academic home, and Quintus C. Wilson was hired to take the helm as founding chair of the Department of Journalism. Housed in several offices in the Annex Building on the southeast edge of campus, Professor Wilson began attracting professional journalists to join the teaching staff and founded the U's student chapter of Sigma Delta Chi, The Society of Professional Journalists. Over the years, such journalism luminaries as Neff Smart, Parry Sorensen, Milton Hollstein, Donald Gale, Paul Cracroft and Ernie Ford would contribute their teaching talents to the academic preparation of a young generation of aspiring journalists. By 1961, Professor Wilson had turned over the administrative reigns to Professor Milton Hollstein who guided the Journalism Department until its merger with Speech Communication on July 1, 1972.

According to Professor Emeritus Boyer Jarvis, the marriage of the two departments could be characterized at the time as a "shotgun wedding," brought about by Humanities Dean Al Cave's desire to conserve resources within the burgeoning area of broadcast journalism that was demanding increasing financial support from both departments. Skeptics of the merger argued that the new academic configuration could never work, but history has proven them wrong.

During the 1970s, the Department of Communication emerged as a national leader in both speech communication and journalism & mass communication. As the department achieved stature as one of the top ten graduate programs in the nation, it also preserved its strong undergraduate heritage and for many years remained the only program in the intermountain west accredited by the Association for Journalism & Mass Communication. Over the past 25 years, the department's reputation has continued to grow, with recognition of its status coming in such forms as a new state-of-the-art facility, first place awards in national journalistic competitions and the selection of the University of Utah as the site for the National Debate Tournament.