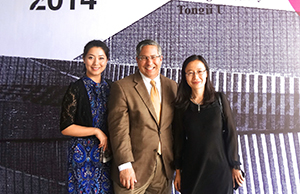 Ono was invited to speak as a visiting scholar, giving talks to undergraduates, graduates and the College of Arts and Media at the university.

Tongji University, located in Shanghai, is one of the top universities in China. It serves more than 50,000 undergraduate and graduate students in various academic disciplines. The College of Arts and Media offers six bachelors and three masters programs, including advertising, journalism and communication, and cooperates with universities in Europe, Asia and the United States.