March 29, 2017 — Over the weekend, the University of Utah’s John R. Park Debate Society earned the season-long national championship awarded by the National Parliamentary Debate Association and finished in sixth place (first in Pac-12) at the NPDA National Championship Tournament held at the Colorado College in Colorado Springs, Colorado.

“This year’s success in the season-long rankings marks a historic level of success for the John R. Park Debate Society and cements the U as the most successful collegiate debate program in the state,” said Michael Middleton, director of the debate society. “The staff and students of the debate society could not be more thrilled to have helped achieve this accomplishment on behalf of the U.”

The overall rankings, which determine the season-long championship, are based on points earned from tournaments throughout the year. This year, the U broke the record for most points earned in a single a season by a public institution and established the second highest point total in the NPDA’s history, solidifying their number one position. Importantly, these rankings are a squad-wide honor reflecting the overall strength of the U’s 18 active debaters. 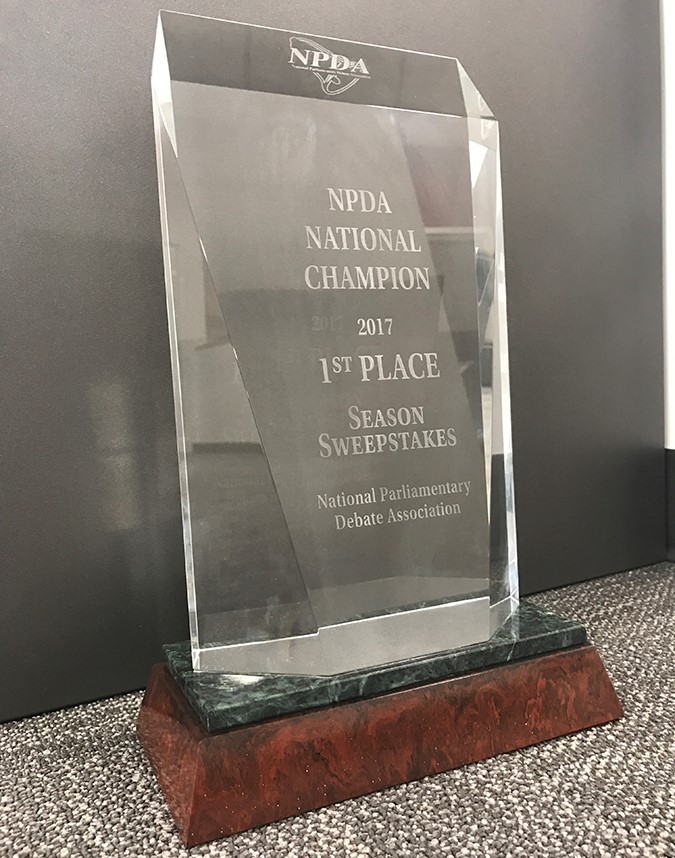 The weekend tournament included more than 140 teams from 41 universities and colleges. In addition to the debate society’s collective success, the U advanced four debate partnerships to elimination rounds and senior Alex Cadena earned an NPDA All-American Award and freshman Jacob McShane earned fifth place among all first-year competitors at the tournament.

“I am very proud of my team,” said Cadena. “We are a young and large squad compared to other schools. For the team to come together, work together and encourage each other to achieve the top ranking is a tremendous success. This year I have seen people on the team go from little to no forensics experience, to developing the skills, confidence and courage to take on the top debaters in the nation. Witnessing and being a part of this has been an honor.”

The week prior to achieving their national championship, the debate society also participated in the by invitation-only event, the National Parliamentary Tournament of Excellence. At that tournament, senior Jesse Hedin and sophomore Skyler Hektner placed 13 out of 52 teams. Hedin finished as the 15th ranked competitor out of a field of 104 college debaters.

Sponsored and housed in the Department of Communication in the College of Humanities, the debate society welcomes undergraduate students from any major and any year to participate in activities. Students compete in five tournaments a semester and have finished in the top 10 for the past three years.

“My experience on this team has been life changing. I transferred from a small community college, with the intentions of competing on the John R. Park Debate Society. The two years I've spent on the team have been one of the steepest learning curves I have ever experienced. This team has the greatest coaching staff in the nation. My coaches invested countless hours into my education. They cared about my success as a person not just as a competitor,” added Cadena.

Founded in 1869, the John R. Park Debate Society has hosted biannual forums for the past several years in an effort to educate the public and to facilitate civil dialogue about contentious political and social issues, high school clinics for area high schools and a summer forensics institute that includes more than 100 participants from over a dozen states.