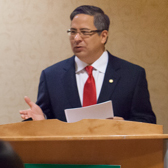 Dr. Kent Ono has been awarded the 2015 Distinguished Scholar Award given by the Rhetoric and Communication Theory (RCT) Division of the National Communication Association (NCA).

The Division says the Distinguished Scholar Award “honors a current member of the division for significant contributions to scholarship in rhetorical and/or communication theory during the past ten years. Distinguished Scholar nominees should have established a body of research that has significant and enduring value. The recipient of the award will be a figure who has earned renown in the field for her or his scholarship and whose body of scholarship serves as a touchstone in rhetorical and/or communication theory.”

In the past ten years, Ono has made significant contributions to rhetoric and communication theory in three primary ways. His groundbreaking work with John Sloop (Vanderbilt University) in the highly popular area of "critical rhetoric" has helped change the field of rhetorical studies. He has also been a scholarly leader of research on race and colonialism in the field of communication.

The best example of this is his book, Contemporary Media Culture and the Remnants of a Colonial Past (2009, Peter Lang), which studies the rhetoric of colonialism in the U.S. and is being translated into Chinese (to be published in China by Tsinghua University Press).

He has also contributed to a third area of research—rhetoric and media—where his work on the television shows Mad Men, Star Trek, and Mighty Morphin Power Rangers, for example, and his work on films such as Pocahontas, Avatar, and Come See the Paradise, have had extensive influence within the field of communication.

Dr. Ono will receive the Distinguished Scholar Award at the RCT business meeting held at the annual NCA convention in Las Vegas in November.