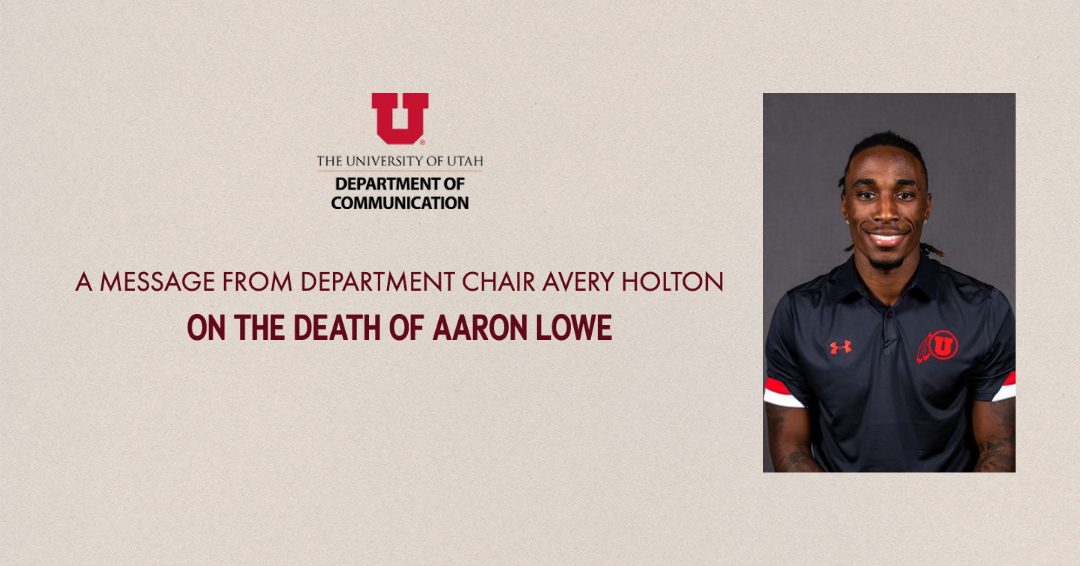 A message from our chair on the death of Aaron Lowe

On Monday, I met with Donna Lowe-Stern, the mother of Aaron Lowe, a remarkable student, deep thinker, and celebrated athlete who was killed in an act of gun violence early Sunday morning. I met Donna in a room surrounded by university leadership that aches for and with her, and we talked about Aaron's progress as a student, about his passion for helping his classmates, and about the excitement she felt for her son to attend the University of Utah as a Communication major.

And I witnessed her grief, one that I have not known personally in my life, but that we have seen a number of times on campus and in our community. One wherein a parent watches their child take on a new chapter of life, hoping they will be safe. Hoping they will be somehow shielded and cared for and protected.

Through her tears, her mourning, Donna asked that we acknowledge and remember Aaron. We began some of that by extending a Certificate of Academic Achievement to Aaron, which Dean Culver and I issued. And we can carry on with that acknowledgement and remembrance by recognizing how special Aaron was.

Aaron was a son, a brother (and a triplet), and a friend to many. Aaron was a Black male student trying to navigate a predominantly white campus and community. As evidenced in his writings during his time in the Department of Communication, he knew the precarity of his situation. Aaron knew that life is fragile. He knew this more deeply than I ever could given my positionality. Aaron knew that life's delicateness is heightened by a system set up to stigmatize Black men.

As a white man, I cannot speak to how such a life is balanced, but I can be challenged to do better by words Aaron wrote. As summarized by a colleague and friend this week, Aaron "spoke and wrote about the salience of his identity as a Black male."

Aaron's legacy should certainly include how hard he worked to gain and maintain a full athletic scholarship. It should include how much he pressed himself to be a stronger student, how deeply he thought, and how he worked to lift up the friends and family around him.

Aaron’s legacy should also be that he recognized what it means to be a Black man today and that he asked us in his own way to acknowledge that and to challenge ourselves to do more. To do better.